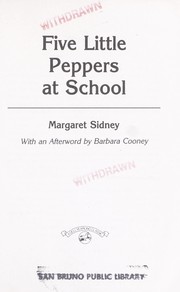 The first of a series, Margaret Sidney's Five Little Peppers and How They Grew (first published in ) tells the story of the Pepper family (five siblings and their widowed mother), their joys, their struggles, their love for one another. Rather episodic in nature, and definitely of its time (there are elements of religious preachiness, strict gender roles and definite social stratification 4/5. Under the loving care of the hard-working widow 'Mamsie' Pepper, the Five Little Peppers get into adventures and scrapes, but always benefit from being Margaret Sidney's wonderful tales of the Pepper family growing up together in the 'Little Brown House" have /5. I truly love the little pepper books!!! They're so homey and heartwarming. You can always be sure that the Peppers will behave well and look out for others, that they'll make the best of whatever comes their way, and that you'll put the book down feeling happy and contented/5. Originally published in , from the Five Little Peppers series. According to Wikipedia: "The Five Little Peppers book series was created by Margaret Sidney from to It covered the lives of five children with the surname Pepper.